Southern Miss and Houston are not exactly bitter rivals, but by the standards of a league as young as Conference USA, they do go way, way back: in the conference's inaugural season, 1996, Houston won a triple overtime game that was the eventual tiebreaker for the C-USA championship and kept 8-3 Southern Miss from its first bowl trip since Brett Favre was quarterback in 1990; in 2004, on the verge of breaking a seven-game losing streak to the Eagles, UH implausibly blew a late eight-point lead and eventually lost a game, in overtime, in which it had outgained USM by 180 yards and not turned the ball over. Last year, in a Sunday game rescheduled by Hurricane Rita, the Cougars knocked Southern out of first place in the East Division by a field goal after USM built an early 10-point advantage.

For his weekly conversation with a blogger, reporter, or other "insider" of Southern Miss' upcoming opponent, SMQ tracked down Houston Chronicle columnist and blogger Michael Murphy over seared Moulard duck breast with foie gras mashed potatoes, fennel and cumberland sauce at Brennan's to discuss the necessary concomitance of one's genuine self to succeed in society and the dynamics of interbeing and monological imperatives in psychic transrelational gender modes.

SMQ: Houston started 4-0 and probably should have won at Miami before a late red zone fumble en route to going up two scores in the third quarter, yet struggled in its opener with Rice and somehow lost last week to a Sun Belt team. What gives? Was the September frontrunner thing a mirage?

MM: If you're asking this question, then you obviously don't pay attention to UH football. The Cougars are the most baffling team I've ever seen. One minute they look sensational, like beating Oklahoma State and almost edging Miami at the Orange Bowl, and the next minute they're as hard to watch as Adam Sandler doing Shakespeare. Let's look at last season -- they finally get over the hump by beating Southern Miss, a team that had spent the previous decade treating the Cougars like the new kid on the prison block. That win put them on the cusp of bowl eligibility and got a strong buzz in the notoriously fair-weather fandom, and then they somehow came back the next week and lost to SMU. At home. With not-to-impressed bowl reps in the house. This team should not have lost to ULL, but it did. You figure it out because I can't.

SMQ: Kevin Kolb is halfway through his 46th season as UH's starting quarterback, but statistically he hasn't remarkably improved since his freshman of the year bit. Are fans impatient, or has Kolb been properly embraced?

MM: It's a little of both. Fans are demanding production, mostly because they know that this is Kolb's final season and after that the cupboard is not only bare, it's being torn down and renovated. Kolb's remarkable freshman year can be attributed to a few things -- Kevin was/is a tremendous talent, there were no expectations, he knew Art Briles' system, he had great receivers like Brandon Middleton and finally (and most importantly) he had a very good offensive line that was anchored by current Miami Dolphins starter Rex Hadnot. Injuries have destroyed the Cougars' offensive line this season (they're down to their third left tackle), which is the biggest cause for Kolb's struggles. By the way, it's only his 45th season. He never redshirted. 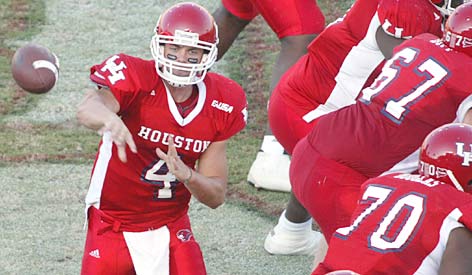 Kolb: A tad arthritic, but barely slowing down as he approaches retirement

SMQ: The conference record remains unblemished, but is it desperation time after two straight losses? UTEP and Tulsa down the road would seem to make USM a must-win for Houston?

MM: It's not desperation time yet, but a loss to USM would definitely push them over the edge. So it's a must-win, especially since they have a three-game homestand against UTEP, UCF and Tulsa, and there's a strong possibility that those games could be played in an empty stadium should they lose to USM. History shows that the Cougars can get up for the good teams, but they haven't yet figured out that they're not good enough to overlook anyone. Like Louisiana-Lafayette.

SMQ: Certainly USM views this game, like last year's at Houston, as a must-win to stay on top of the tiebreaker with Central Florida in the East following an utterly disgraceful performance against Tulsa. What's the line coming in on the Eagles, from the Houston perspective? How has this changed in the last few years?

MM: It hasn't changed -- UH still gets up for USM. Before it was because the Golden Eagles habitually kicked the crap out of UH. Well, the Cougars finally got over the hump last season, and they now want to prove wasn't a fluke. But they have a lot of work to do, especially if they hope to stop a legit talent like Damion Fletcher, who could go DeAngelo Williams on them and rush for 250-plus yards -- and I'm not exaggerating. They could put a SWAT team on the field and UH still couldn't drop an opposing running back.

Consider that the defense has already allowed 108 yards to Rice's Quinton Smith, 85 to Oklahoma State's Bobby Reid (on only seven carries), 148 to Miami's Javarris James (in his first start) and 110 to Louisiana-Lafayette's Tyrell Fenroy. And don't even make me mention the awful things DeAngelo used to do to the Cougars. The guy lettered in both football and track with the long-distance performances he dropped on UH.

[SMQ would like to note DeAngelo was an equal opportunity humiliator who left every defense in the league - certainly not excluding USM's - with deep psychological scars, regret and feelings of abuse]

SMQ: In 2004, when USM made a ridiculous comeback to win at home in overtime, you called Southern fans "possibly the worst in the nation" for tossing debris and insults at the Houston sideline during the game. Our fine institution, the "Home of Southern Hospitality," was duly rocked. A collective gasp echoed across campus; Kappa Delts fanned and passed out from vapors. Why, we did declare. Do you stand by this assessment, or was it an overreaction? And, since this is not necessarily a family-friendly blog, I always wondered: what were the epithets so horrible as to make a veteran sportswriter blush?

MM: It wasn't an overreaction given what happened, but I guess I should have narrowed that down to the student section along the UH sideline. Rowdy students are nothing new, and at many schools you laugh at some of the funny things they come up with, but these guys were over the line (and by writing this response, I guess we'll be encouraging similar stunts at this game). And "security" couldn't have cared less.

My word, a negative column about little ol' us?!

Anyway, throwing bottled drinks, coins and batteries is stupid enough (even though I'm sure in retrospect everyone who tossed such items will insist they were before-the-fact contributors to hurricane relief), but one point that most missed was that it wasn't the objects being thrown, it was the insults. I won't get specific because we don't want those Kappa Delts again swooning with the vapors, but suffice it to say that it was like a Klan rally. When you're calling players f----t (insert a well-known epithet for a gay person)-assed n-----s (insert a well-known epithet for people of African-American descent), then that's not clever, it's just wrong. And it wasn't just one or two guys screaming it out. It's nice that they consider USM to be the "Home of Southern Hospitality," but that hospitality it shouldn't be circa 1861.

["Southern Miss: A Klan rally in the stands!" The marketers are loving that sentiment. If anyone else had ever said anything like this - instead of writing glowing letters about the crowd, like Nebraska fans did after beating USM down in 2003, or the president of USM's alumni association did after the Houston game in question - then talk about an intimidating place to play!]